Sadly, the end of my summer in Devon has arrived.  My time since returning to Canada has been occupied by a hectic-yet-educational couple of weeks spent tree-marking in Huntsville and CIF conference-attending in Grande Prairie.  Now that I’ve settled down in my Toronto apartment, I’ve finally found the time write up an August post for my Prince of Wales internship blog.  For this final entry, I’ve decided to put together a series of loosely connected anecdotes and experiences that will hopefully fill in some gaps and give readers a more complete picture of my summer experience.

As I’ve previously mentioned, my time in the UK has been split between two companies: Pryor and Rickett Silviculture and Euroforest.  As a timber harvesting company, Euroforest works to ensure that contracted harvesting operations are performed to high standards of safety and environmental responsibility.  My work with the firm this August has involved auditing harvest sites to ensure such standards are being met.  I have also worked with the company’s harvest managers to mark power lines and protected areas prior to harvests, and have conducted a number of roadside timber volume estimates.  Overall, it has been quite interesting to learn about the challenges and responsibilities faced by those working in this area of the forest industry. 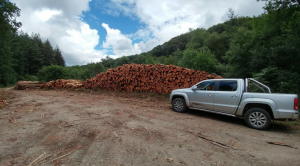 I’ve written previously about my work with Pryor and Rickett Silviculture (or PRS) and my daily activities with the firm.  Though the majority of my work with PRS throughout August has continued in a similar fashion, I was fortunate to spend the final week of my time with the company in Wales, working out of PRS’s Brecon office.  My brief exposure to Welsh forestry was a reminder of the massive role played by sitka spruce plantations in UK forestry.  These trees (native to North America’s western coast) love the mild temperatures and high rainfall of the Welsh climate, and their incredible productive capacity has resulted in vast sitka forests planted throughout the Welsh hills. The dominance of this species remains a contentious issue for some UK foresters, with many expressing concern about the sustainability of such even-aged forest monocultures.  Still, many foresters point to the unmatched timber potential of sitka spruce as evidence that the species will continue to be a major component of any attempt to meet UK and global timber supply needs in the coming decades. 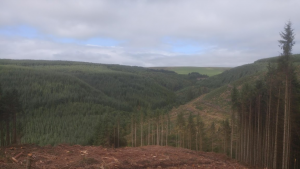 A forest in Wales.

In addition to new English vocabulary words (which I may or may not be using correctly in the above heading), my internship has exposed me to an incredible variety of UK forest and environmental management challenges and opportunities.  I’ve chosen a few such elements to mention briefly in the following paragraphs, in order to round out a description of my time and learning in the UK.

I’ve decided to present these mostly unrelated topics as a series of photos, since nice pictures are all anyone really wants to see anyway.  Enjoy! 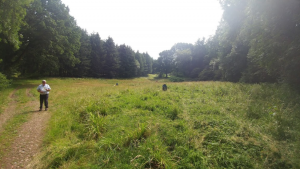 Pheasant hunting (A.K.A. “The Shoot”) is an important source of revenue and recreation for many private estates in the UK, and therefore must be taken seriously be forest managers.  In the photo below, a PRS colleague explains how factors like topography and forest height influence the design of landscapes managed for such activities. 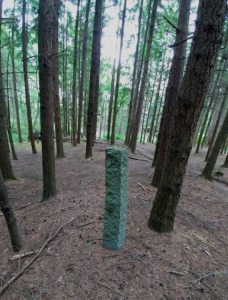 Archeological features are common in British forests.  These features must be noted in management plans and special care must be taken by timber harvesters to avoid damaging such important elements of cultural history. 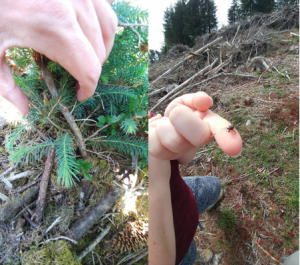 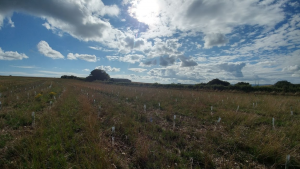 As in all parts of the world, foresters in the UK are constantly working to improve their understanding of trees and forests.  Toward that end, PRS conducts trials in many of their planting sites.  At this site, the effects of sugar fertilization on native broadleaf seedlings is being tested,in order to better understand opportunities and risks involved in such practices.

Overall, my time spent in the UK this summer has been a fascinating exploration of forestry in a unique and challenging cultural context.  I consider myself fortunate to have been given an opportunity to learn from the experience of my British colleagues and to explore the forests of this amazing country.

Thanks to all my readers who have followed me on this journey. Cheers! 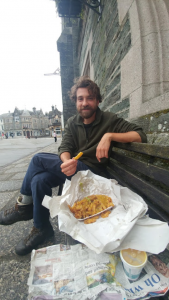