The following employers provided summer internships to award recipients during the summer of 2015:

Strategic Natural Resource Consultants – SNRC is one of the leading natural resource consulting companies in coastal BC, specializing in forestry and environmental conservation. David Johnes is working with SNRC in the  summer of 2015. Check out his internship experience here.

Algonquin Forestry Authority – Based out of Huntsville, Ontario, the AFA is the Crown Agency that undertakes a wide variety of activities to ensure sustainable management of the forests in the well known provincial park. Keira Tedd worked with the AFAin the summer of 2015. Check out her internship experience here. 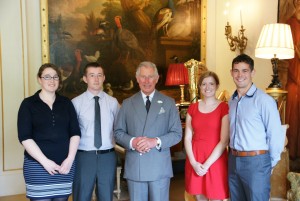 Follow the Canadian The Prince of Wales Forest Leadership Award recipients Jacqueline Hamilton and Ross Hobbs, through their 2015 summer internships with Pryor and Rickett Silviculture, as well as the Duchy of Cornwall, in the UK! Click on their names above to be directed to their individual blogs and read posts about the work they did while on exchange.

On June 10, 2015, recipients of The Prince of Wales Forest Leadership Award – Ross Hobbs, Jacqueline Hamilton, Keira Tedd and David Johnes – met with His Royal Highness The Prince of Wales at Clarence House in London, England! Visit the Duchy of Cornwall’s webpage chronicling the event: duchyofcornwall.org/news/forest-leadership-award/