Two months in and the first blog. Apologies but Canada is very inspiring and the laptop is less so!

Algonquin Park is big. So big that it would cover most of Cambridgeshire, Norfolk and my home county Suffolk (Figure 1) if only we could commandeer it from the Canadians. The park is 763,555 ha which could fit around 40 Thetford Forests into it (the UK’s largest lowland pine forest). 66% of Ontario is forested (71 million ha) and of this 9% are defined as Parks and Protected areas (6.4 million ha) – where Algonquin Park fits. Akin to our Forestry Commission woodland the park is Crown owned, as is 81% of Ontario’s forests, so only around 10% of Ontario’s forests are privately owned (Government of Ontario, 2017).

Figure 1 – A comparison of Algonquin Park and East Anglia. Thetford forest is the small green patch in the centre of the Algonquin Park boundary in the right-hand map (Mapfrapp, 2017)

When I first saw the park, I was surprised that if it wasn’t for the park signs you wouldn’t even know you’ve entered it (Figure 2). Crown forested land surrounds most of the park. It is an absolute pleasure to be constantly driving alongside rolling forests. It is also fantastic to be working in a healthy forest, beaming with natural regeneration and not decimated by deer browsing as our UK woodlands are. 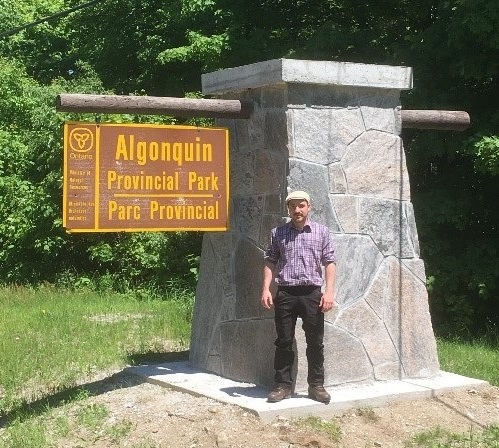 Figure 2 – Even the signs are big

Around 65% of the park is zoned as available for timber management (RU zone) however harvesting only occurs on approximately 51% of the total park area due to site limitations and other protection measures within the RU zone.  The other 35% consists of other protection zoning such as wilderness/nature reserves (Figure 3). 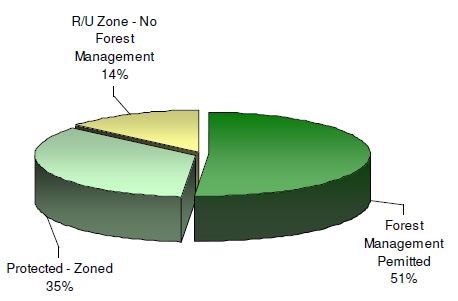 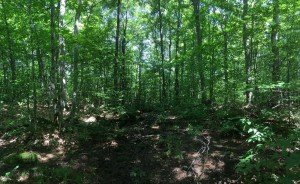 In contrast, the drier and warmer east side of the park has led to a more shade intolerant mix of tree species which has evolved from the presence of wildfires (Figure 5). 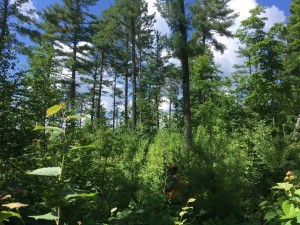 The two main silvicultural systems implemented in the park are both continuous cover forestry systems. With wildfires now suppressed in Algonquin Park forestry provides the ideal opportunity to mimic this natural disturbance. This is undertaken through the even-aged shelterwood system (Figure 6) and is undertaken mostly to the east of the park. 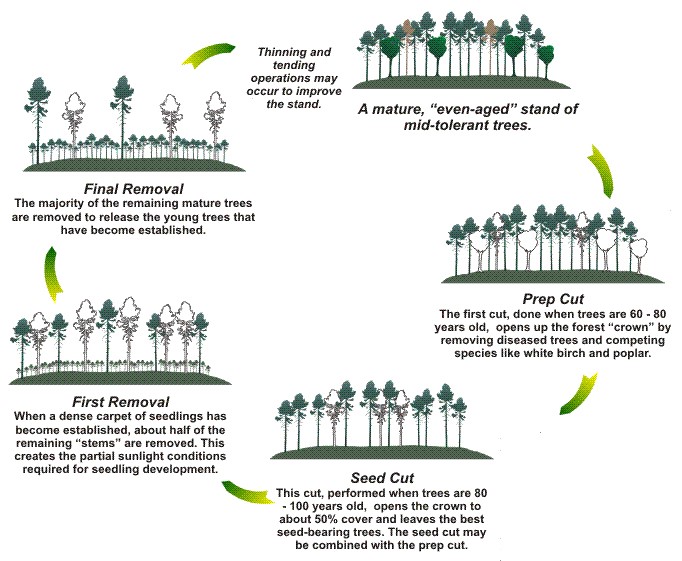 The single tree selection system (Figure 7) mimics natural decline and falling of individual trees within a climax forest type and is found in the hardwoods to the west of the park. 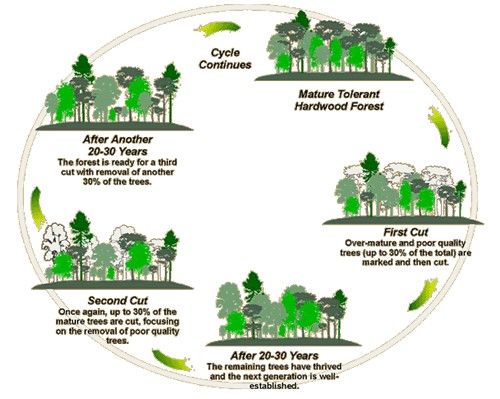 Continuous Cover Forestry systems require skilled tree markers to decide on which trees should be removed or retained. In Algonquin Park, this is undertaken by the tree marking team. This is one of the first jobs most AFA employees begin their career with but comes with a high amount of responsibility as any decision made will directly affect the forest. It requires everything you have learnt studying forestry; tree health, crown spacing, timber quality, wildlife habitat and operational considerations to name but a few elements that you must think about. It has been one of the most enjoyable tasks I have been involved with to date. Figure 8 outlines the equipment a tree marker takes into the bush. 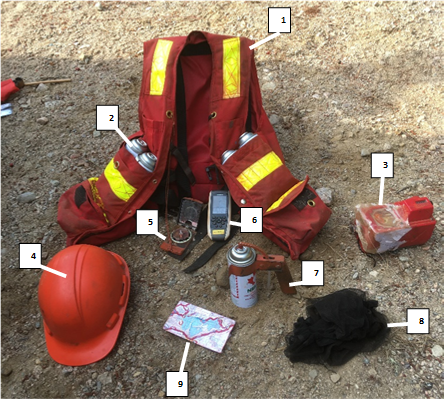 One of the first tasks is to establish the Cut Boundary (CB – Figure 9). This is usually undertaken with red paint and with the GPS unit you track the GIS shapefile boundary (usually a compartment boundary).  Cut boundaries can also be related to public roads, watercourses, lakes and swampy areas. If this is the case they require specific distances that are measured with a string box. A string box is used rather than a normal tape measure as it is easier to use in the thick bush and is quicker as you can just break the string (it’s biodegradable). 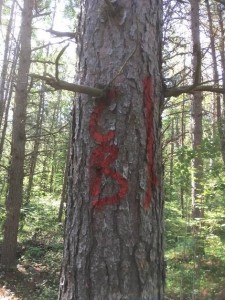 A small team of 3 – 4 usually mark a stand. One person will lead following the CB tracking up to it then away covering a distance they feel comfortable with (at some points I’ve been marking a 40m width). The next person then repeats this marking up to their paint line rather than the CB. The most important thing is to not leave any gaps or pockets in the stand. A ring is sprayed around the circumference of the stem enabling it to be seen from all angles. A follow up butt mark is essential so that each tree, post-harvest, can be verified that it had been marked and was appropriate to be removed (Figure 10). Stands that have been completed are audited by the tree marking supervisor to ensure that no gaps are present and the stand has been marked appropriately. 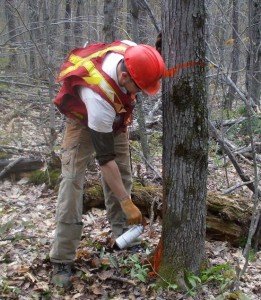 Around 1/3 of the standing volume (basal area) is removed (from all DBH size classes) at each cutting (refer to Figure 7 above). Trees to be removed are primarily those with defects (Figure 11), disease or signs of stress (crown dieback). Some undesirable species such as red maple are also targeted. A prescription is followed that moves the stand towards an improved basal area structure and quality over time. Each marker aims to hit a 5ha average per day. 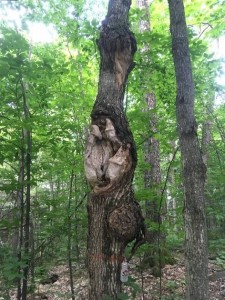 Figure 11 – Not a mills preferred choice

Pine – shelterwood tree marking
This is undertaken in four thinning interventions; prep cut, seed cut, 1st removal and final removal (refer to figure 6 above). Good pine is marked to be retained with the retained basal area kept higher in the initial prep/seed cut, and then going down to around 25 trees p/ha in the final removal cut where the established regeneration is fully released (Figure 12). Each marker aims to hit a 4ha average per day. 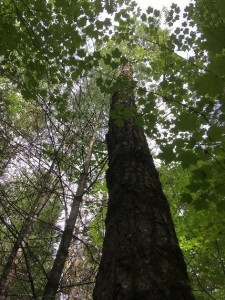 Wildlife trees are also marked in blue paint and retained. These are trees that are either for seed (mast), cavities (nesting) or veterans (Figure 13). The aim is to leave at least 30 of these trees p/ha. 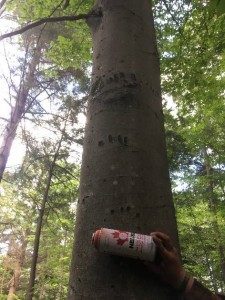 Figure 13 – In this picture, you can see historic marks from black bear claws where they have been climbing up to reach the beech mast.

Silviculture Effectiveness Monitoring – or what’s growing where and is it what we want
As the Park is Crown owned a rigorous auditing system is implemented by the Algonquin Forestry Authority (AFA) as part of the approved ten-year forest management plan. A key part of this is the monitoring of post-harvest assessment to determine the extent and quality of regeneration. The monitoring of regeneration levels is less common in the hardwood forest where single tree selection has been implemented and natural regeneration is assured. However, if group openings were created then they are checked (when releasing mid-tolerant natural regeneration of good timber species, such as yellow birch). SEM is most commonly conducted within the shelterwood and clearcut harvest systems where white and red pine are managed.

Once a final removal cut has been undertaken (see Figure 6) then the stand must be assessed to determine if the tree regeneration present is ‘free to grow’. Before the AFA can report a stand as free to grow they must check to see if there is suitable advanced regeneration (6m +), of appropriate crop trees established at minimum stocking levels. If standards are met then the AFA can report a stand as a silvicultural success and it is passed onto the Crown for their own checks.

I was helping Mike Slater, an AFA SEM surveyor, assess various stands. We used a field computer which automatically plotted points within the stand based on its area. Under 30 ha requires one cluster p/ha and stands over 60 ha require 1 cluster every two hectares. We also used a more basic tool, an SEM stick, which I thought was some sort of technical, laser firing measuring device, but turned out to literally be a 2.26m stick (Figure 14). 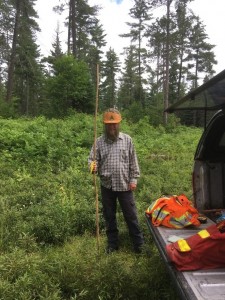 When the SEM stick is swung from the plot centre it creates a 16m² circular plot. Each cluster is made up of two 2.26m radius adjacent plots, and each of these is made up of 4 quadrants (Figure 15). 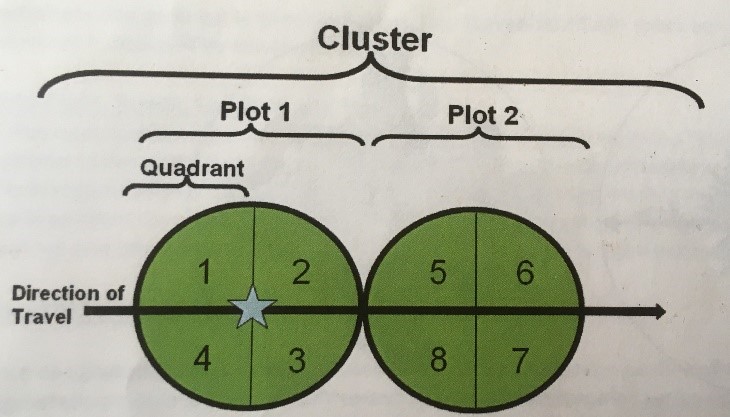 In every other cluster, the overstorey basal area is also assessed (Figure 16). 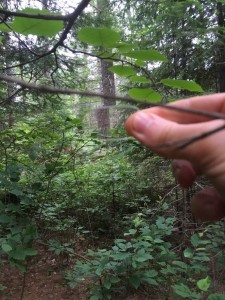 Once the data is collected for the stand then the field computer calculates whether the level of crop and acceptable species present within the stand meets the standard. This is based on the silvicultural ground rules for a stand – which are far too complicated to explain within this blog – but effectively just reflects the minimum stocking and tree species standards that are appropriate to achieve the desired future stand conditions. The desired stand conditions are based on the past species make up and future management direction. It is the job of the SEM surveyor to provide a recommendation to the forester on whether a stand is ‘free to grow’ or the best action to fix the situation, such as, replanting or site preparation (exposing mineral soil to encourage natural regeneration).

Due to the remote locations and minor forest roads that have started to naturally regenerate with trees, an ATV is often used. After appropriate training, I could have a go which has been a definite highlight (Figure 17). 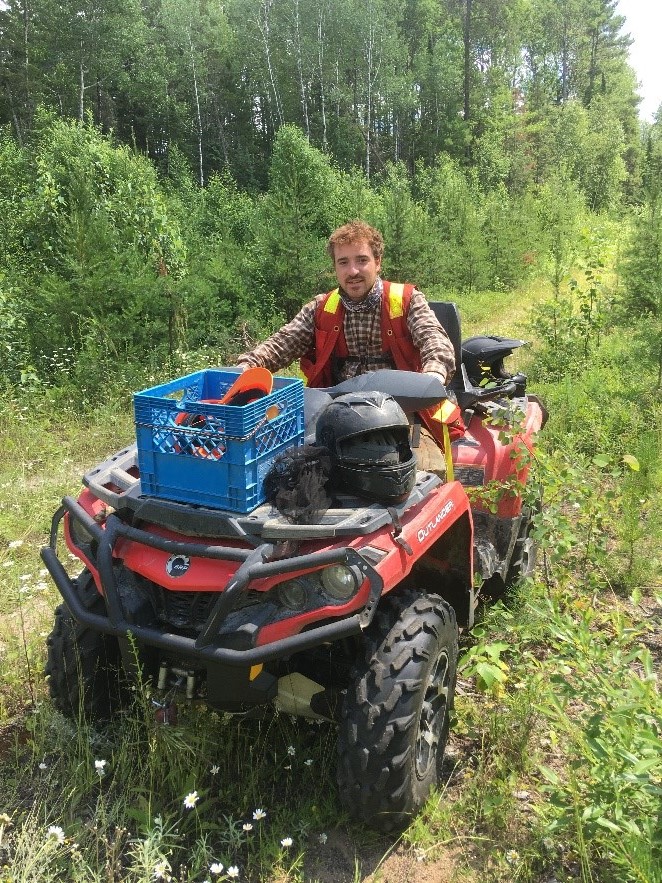 One final thought is the potential use of remote sensing to undertake this type of surveying in the future. Perhaps fly the whole forest unit with LIDAR and then extract specific areas (N (the number of clusters) x 32m² area) to then analyse for the tallest regeneration, competition, height and species (complicated but accurately identifying tree species would be challenging).