My second month in Norwich has been just as exciting as the last, though, I was disappointed to miss Canada’s 150th celebration. However, the Canadian spirit was felt from here in Norwich. Since my arrival I have settled into a routine and have become used to the British customs. Black pudding and beans with breakfast and are now sought after rather than examined. I have started calling pants, trousers, so my colleague’s children won’t laugh at me anymore. Its apparently a ‘thing’. My land-people have been very welcoming and have included me in their day-to-day lives which includes their jobs as physiotherapists. I am certain my posture has improved significantly over the last couple of months from their advice and watchful eyes. Overall, the last month in UK has been great – a fun mix of leisurely adventures and urban forestry expeditions!

An example of one of my AutoCAD drawings of a Tree Protection Plan, a part of our Arboricultural Impact Assessment reports. The large circles are Root Protection Areas or RPAs.

Throughout the last month I have been pushed by the professionalism that surrounds me while working at AT Coombes Associates. It hasn’t taken long for me to figure out that to be a pro, it’s not just how you present yourself in person but how you present yourself on paper. Communication has become my biggest challenge in the last month. A very crucial part of being an arboricultural consultant is being able to present your findings in a way that is accurate yet, interpretable. Contractors, council members, and private citizens are constantly working with the business and utilizing the services we provide. Being involved with such a dynamic cliental requires a broad understanding of many different customer needs. Specifically, dealing with contractors has been the steepest learning curve. I have had to learn the way buildings and driveways are constructed, how to map houses and trees on a completely foreign piece of software called AutoCAD (which I got reasonably proficient at quick and I’m proud of myself for that!), and have learned the available alternative materials and techniques used for construction that minimizes damage to trees. All of which must be included in a report that accurately represents the trees to the specifications found in a document called BS5837. Holy moly! If I said it was easy I would be lying. Luckily for me I am not on my own. My employer Andy and my colleagues keep a watchful eye on my work and ensure what I write in my reports is to the highest of standards.

I will be mentioning the document BS5837 a few more times so I will to explain its purpose. First of all, the ‘BS’ part stands for British Standard. A British Standard is used as a guide to ensure quality of goods and services. For example, BS5993 is a guide to constructing cricket balls and BS6008 is essentially a guide to brewing tea. BS5837 is specifically for the protection of trees during construction. I personally think this document is one of the most beneficial pieces of writing, not just for the retention of trees, but for the quality of life for people who live in urban areas. I could get into all the benefits trees provide in urban settings, but I don’t think I could fit that all in one blog post! Anyhow, the BS5837 is what guides an arboricultural impact assessment, which is a service AT Coombes provides.

During a routine Arboricultural Impact Assessment(AIA) survey, I was fortunate enough to discover a tree that I will never forget. Though I doubt the tree will remember me, this pedunculate oak (Quercus robus) was remarkably unique and is what I see as an iconic figure of British arboriculture. The tree was over two meters wide, completely hollow, and even though there wasn’t any way to tell for certain, likely over 500 years of age. To put that into perspective; it is more than three times the age of Canada, and all of King Henry VIII’s wives would have still had their heads when it first established. That’s old. This tree fits into the criteria of veteran and ancient tree classifications (classifications mentioned in BS5837). It fits these criteria because of the niche ecological habitat it provides, its great age and size, and the fact that it has had a community built around it which gives it cultural significance. Both of veteran and ancient classifications are important in conservation of trees, especially in areas that development is proposed. Despite this oak’s stoic figure, trees of it’s age are very sensitive and great care must be taken to ensure their preservation. So, our little friend BS5837 comes into action once again. The document states that twelve times diameter of a tree stem is the radius of an area where roots must be protected; giving our lovely oak tree a twenty-four meter radius of sweet, sweet, root protection during construction and development.

This is the base of the very large oak tree discovered during a survey. It took a panoramic photo to capture its size, so don’t mind the distorted chunk of bramble in image. A beer-can can be seen through the basal cavity, leading me to believe people enjoy the center of this tree as their personal beer drinking spot. Cozy.

On the topic of root protection, I found myself with my hands on the tools this past month doing root investigation. When reporting an AIA survey, its standard to map out where there is root protection areas (RPAs) and overlay that map with the plans for proposed developments. More than often developments and RPAs come into conflict. There are ways that the two can co-exist, but in this recent case there was a question of whether the roots were even present in the RPA. The way tree roots grow (root morphology), is directly affected by the potential barriers that may exist in the root area. In this case, my colleague Kit and I were investigating whether the roots of multiple large oak trees were effected by a ditch, which could have been a potential root barrier. Kit and I used a high-powered air-nozzle (airspade) to excavate meter long pits in a way that would not damage any potential roots. To do this, one must be ready to get dirty. The airspade blasts air out twice the speed of sound, spraying dirt in all directions, eventually filling one’s pocket full of soil and rocks. After a few hours of airspading, one may begin to reconsider office work… As we assumed, no pits contained any roots which means the ditch was acting as a root barrier and means it will alter constraints which were previously in place from BS5837’s guidelines. 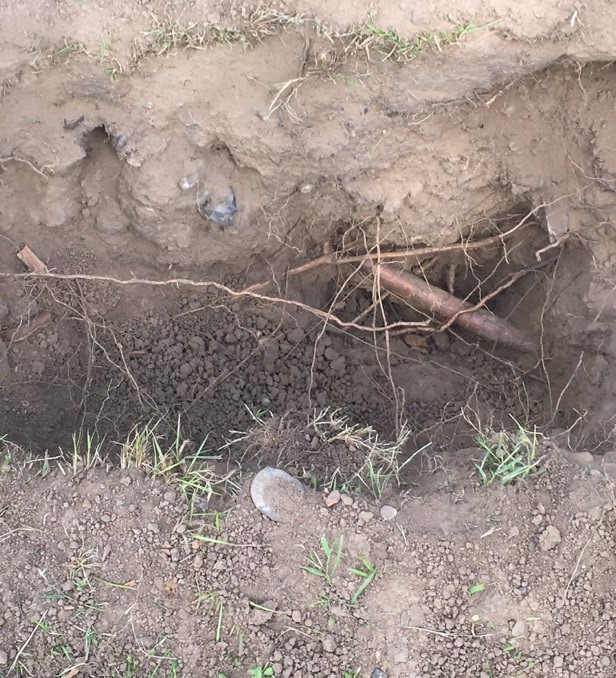 An example of a pit dug using an Airspade. Roots are present in this pit. They were found at approx. 75cm deep.

Since arriving here in Norwich I have been immersed in the world of fungi. Not without possibly hundreds of fungi puns, my colleagues have shared their knowledge of the local wood decay fungi. When assessing the risk of tree failure, the identification of each type of fungus can help arborists understand the potential threat of wood decay and its extent, which degrades the structural integrity of the tree. Though it is not a positive thing when fungi are found, it is very exciting. When out surveying, finding a tree that is hosting an interesting fungus is when arborists pull out their magnifying glass and become a tree version of Sherlock Holmes. And, if the arborist has their arborist buddies around, all must rush over and share their opinion on the exciting discovery and determine the potential fate of the tree. I absolutely love it! What I discovered is that many of the common fungi associated with tree decay in East Anglia of England are similar or the same as fungi found in Canada. The common few that are repetitious include: Honey fungus (Armillaria spp.), Dryad’s saddle (Polyporus squamosus), and Chicken of the wood’s (Laetiporus sulphurous). All as glorious as they sound. As I sit here writing this, in my head I am saying in an Italian accent, “We ain’t messin’ round with no portabellas!”. I don’t know why that’s in my head but I think it has something to do with my colleagues. Nonetheless, my appreciation of fungi has never been stronger and I’ve recognized how important it is to be fungi savvy in the urban forestry industry. 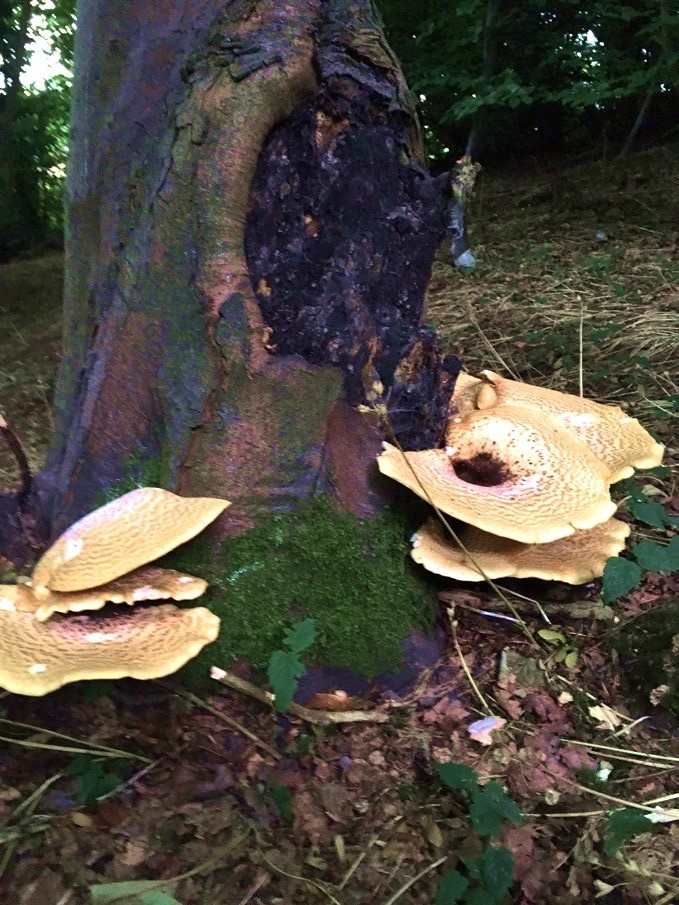 An example of Dryad’s Saddle (Polyporus squamosus) decaying the base of a Sycamore (Acer pseudoplantanus). I have heard you can eat these but I wouldn’t and I don’t suggest anyone does.

It is quite easy to get carried away when writing this blog because I have been learning so much! Andy, my employer is constantly setting me up with new things to see and do. As he likes to say, “I am contributing to Reg’s brain expansion.”, which is usually followed by Andy lifting his tea mug and setting it back down. I then ask, “Anyone want tea?”, and Andy will almost certainly reply, “That’s the best thing you’ve said all day!”. Classic. A few of the things I have done in the last month include, a visit to Cambridge botanical gardens, a meeting on woodland burials, paintballing, and visits to multiple cathedrals. On top of all of that, I made a trip to Hereford where I met my Canadian friend Theri, the other Prince of Wales Leadership Award recipient! We had a lovely trip to the welsh coast hosted by Russel Horsey, another remarkable forester (Thanks Russel!).

I better wrap things up. My next post will be on a couple British municipalities and how they handle their tree populations. Thanks for reading!