The second month was a time when I became comfortable enough to not use my GPS as much when driving to sites. I also realized that the UK is a beautiful place and because I haven’t made time to explore a lot of it this summer, I need to come back. As my placement reached its halfway point, I became more confident in the work I was doing and also realized that I drank more tea in the last 2 months than I have in my entire life. This is a habit that will probably stay with me for a long time. I never thought I’d say this, but there’s nothing better than a cuppa any time and many times in the day!

On Social Life
Making friends in a different country is harder than one might think. At university, friendships are served to you on a silver platter, you go to the same classes every day and you have a multitude of humans and possible acquaintances to choose from. I’ve come to this realization as soon as I got here – and quite frankly, I cannot expect my sorted adulting coworkers to hang out with me every evening. My flat-mate, a nurse, has a schedule so different to mine that I barely see her. So I prayed to the internet gods and spent some time on some questionable apps. But in the end I’ve come to terms with the fact that I won’t come back with too many social experiences. And that’s okay. It did, however, make me realize how much I took my social life for granted.

On Veteran Trees
There are some very impressive trees in the UK. One of my bigger tasks this summer was to explore some estates in search for veteran trees. These would be great big, impressive trees that we may want to halo-thin around in the next 5 years or so. Halo-thinning is a process in which the trees surrounding our individual tree of interest are cleared so that enough light can reach it and it has the capacity to spread its crown more. In addition, I had to also find and determine potential veteran trees, which are not quite there yet. In an estate that selected 60 hectares of its total area for veteran trees, I had to mark and map around 4 or 5 potential vets per hectare and then define 20 actual veteran trees. Sixty hectares doesn’t sound like too much, but it gets more complicated when I spent a lot of the time looking for the woods! I managed to mark them subtly with blue spray paint, get their coordinates and map them on our mapping software. In my lonesome travels through a fragmented landscape I have met many friends, including a herd of young bulls, several flocks of sheep, hundreds of pheasants (more on that in the next blog) and the occasional muntjac (a very small, dog-sized deer introduced to Britain from Asia). 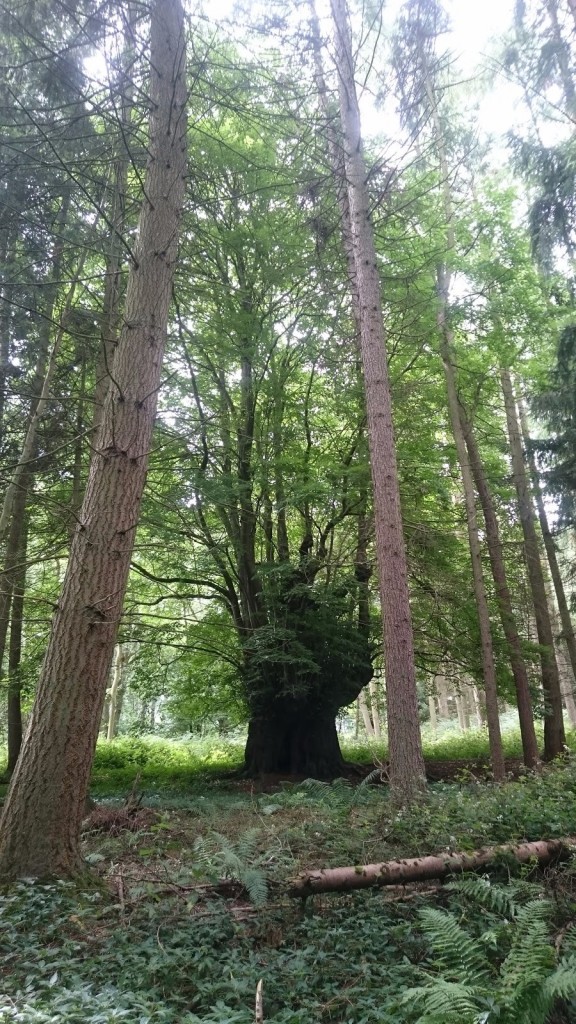 (Fig 1. Trees like this would be marked at veteran trees. Unfortunately, this one was a couple meters outside of the boundaries of the estate I was working on, so I couldn’t mark it!) 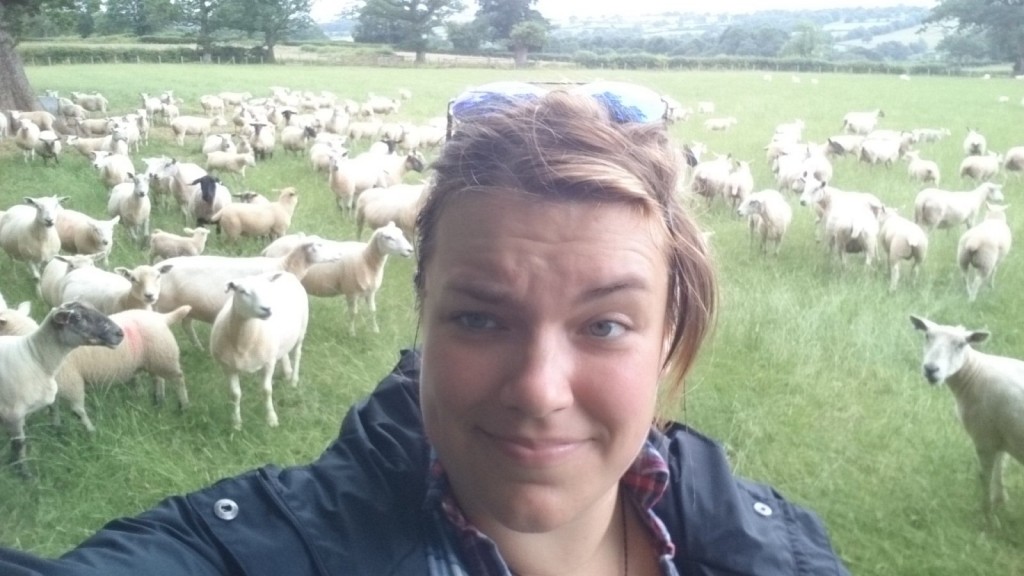 I’ve made many fans over the weeks. They usually try tell me things but I don’t speak sheep.

Trip to Brighton
Last year I did a crazy 6 week pilgrimage walk (850km) through northern Spain and met many people that I’ve kept in touch with. One of my Camino family members Les, who lives near Brighton, invited me over for a weekend to explore the south coast. So I went. The terrifying thought of being on a highway near London and hours away from Hereford where nobody from PRS can come save me if something happens disappeared quickly, probably after I realized that driving on a highway is much safer and easier than driving through little back roads lined with unmanaged hedgerows (more on that in the next blog). I loved the coastal area, I got to see Eastbourne as well as Brighton! I saw the magnificent Seven Sisters Park from a double decker bus, ate fish and chips on the beach and explored the Brighton Lanes. Relaxing and exploring new areas with an old friend was an amazing experience and I felt like I need to go back. And one day, I will show my face again in Brighton. 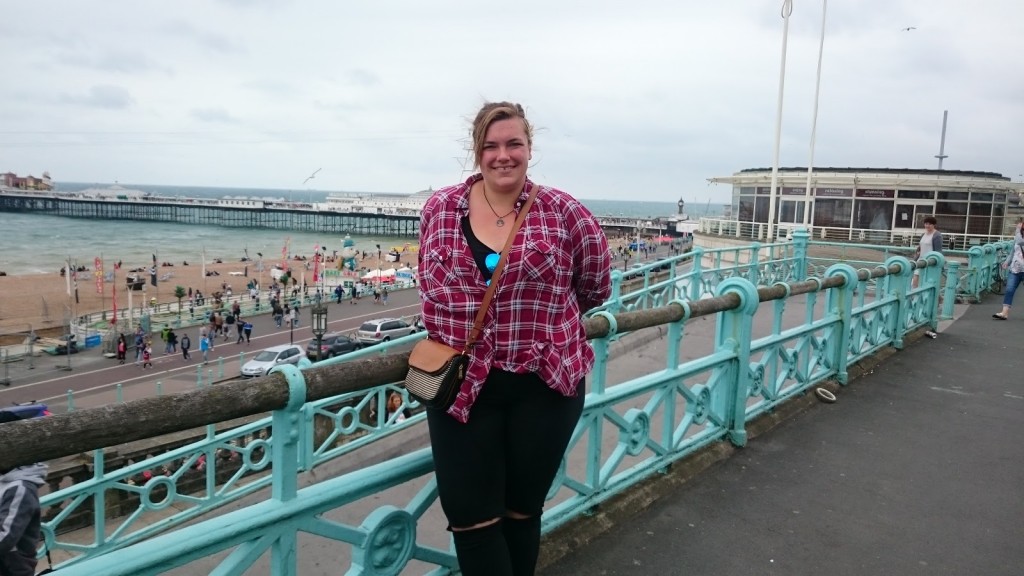 Brighton pier behind me!

#ForestLeadersUnite Reggie in Wales
Reggie came to visit me one weekend at the end of July – we had an excellent road trip to the west of Wales, where we spent the night with Russell Horsey and his family. The drive through Wales was beautiful, and despite the rain we had a really good time! The day included a visit to a church yard which had 1000-year-old Yew trees, and a trip to Aberaeron to get some very famous ice-cream (The Hive Ltd.) and crab fishing! I felt accomplished by visiting two coasts in two weekends! If I weren’t in forestry I would have definitely chosen the fishermen life. It was an excellent day followed by a very nice campfire – the kids were amazing, we had a lot of fun, got to know each other, as well as Russell and his family, and enjoyed the beautiful landscape. The next day we had to be at a birthday party in Hereford, so Reggie got to taste a bit of the calm Hereford nightlife as well. 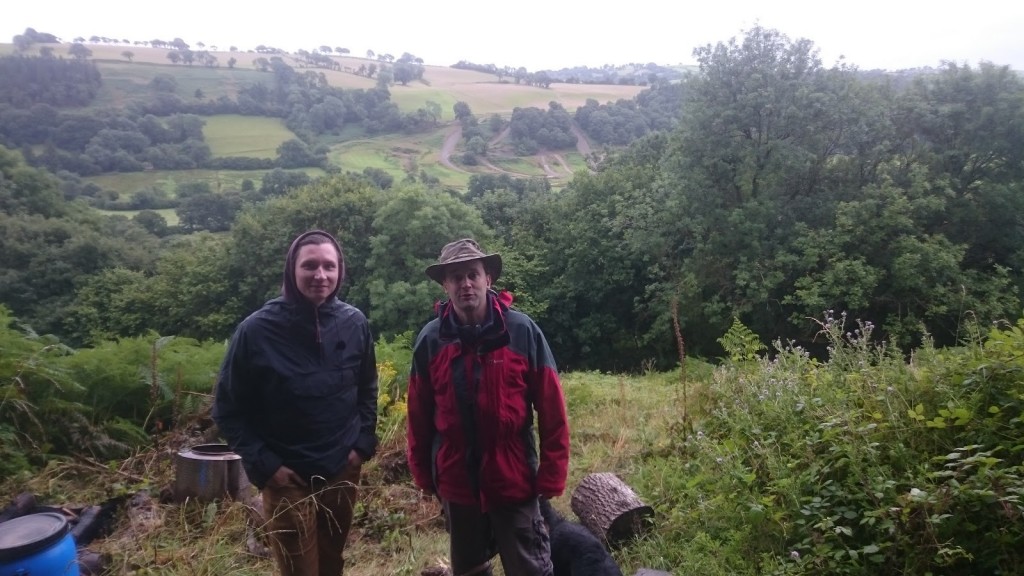 Reggie and Russell in Wales in Russell’s 20-acre backyard.

The Royal Welsh Show!
I got to drive through Wales again two days later! It definitely is my favorite landscape thus far, and I really enjoyed it. The Royal Welsh Show was an experience to remember. As one of the biggest agricultural shows in Europe, it brings the welsh and other British nationals together to appreciate agriculture and everything that comes with it, from machinery to chemicals to fishing gadgets to forestry. I had an excellent time observing the woodsmen show as well! I watched a sheep shearing competition as well as got to learn a little bit about welsh conservation efforts. I visited the Confor tent for a talk on post-Brexit forestry investment opportunities and challenges, and met some really fine people from the ICF and other organizations. As usual, I was too shy to ask for a selfie and I regret it to this day. The RWS presented an opportunity for me to find a proper hat – as I’ve been slightly caught off guard with the intense heat wave that Britain underwent in the start of my placement. I was searching for a Tilley hat which, according to several foresters I’ve met at the Woodland Heritage field weekend, is very popular among British foresters. Funnily enough I encountered my first Tilley hat in Ghana a couple months before, so I figured I should get one of my own and start building my proper forestry wardrobe (I probably won’t include tweed in it just yet). I liked one, but they didn’t have it in my size! So the search continues. On a different note, I’ve also been told that my wellies are not adequate, so I will search for the perfect pair of wellies. One day I will get there.

Confor tent! Several presentations from different people in the sector followed by a very British buffet.

Quintessentially British experiences
I have been longing to experience things that would be hard to find elsewhere, and I am very lucky because I have definitely been presented with the opportunities to do so. Apart from going to a pub quiz every two weeks (and still not being able to answer almost anything), I’ve experienced Pimm’s (SO GOOD!), went to a battle re-enactment at the Tewkesbury Medieval Festival, more beer festivals and attempted to find some live music events in Hereford. 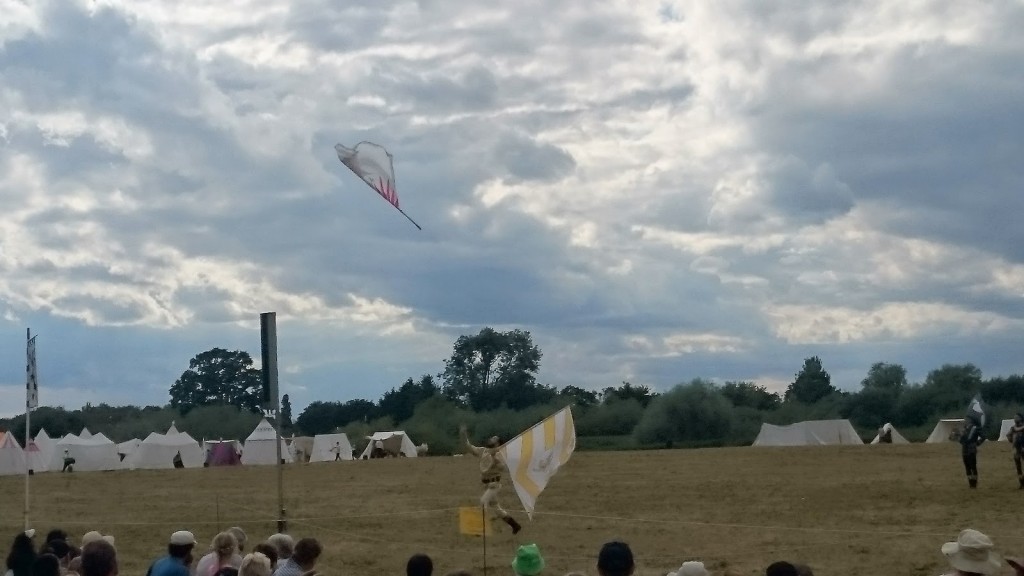 After the battle re-enactment there was an extraordinary dance with flags. 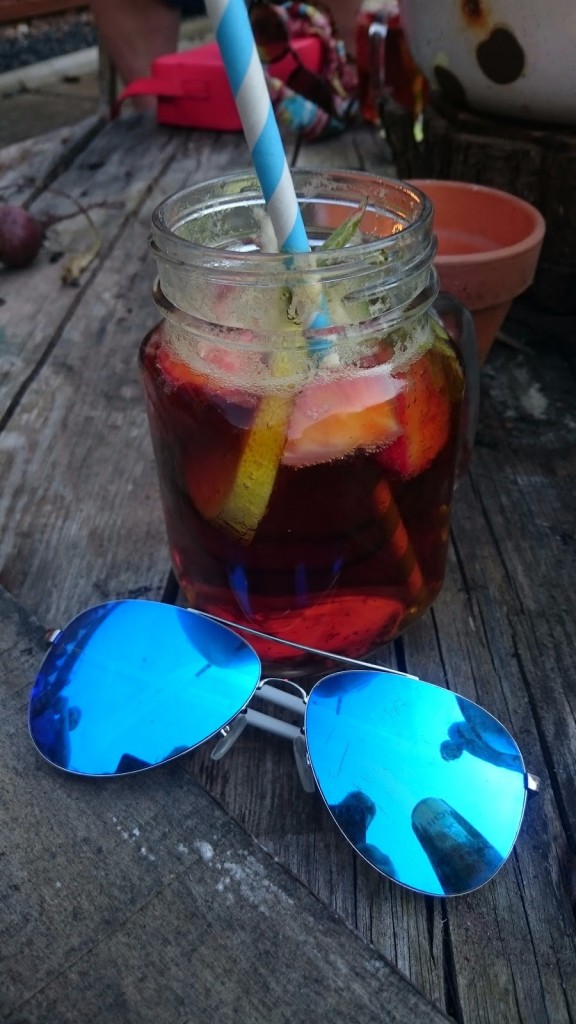 Pimm’s and a barbeque on a lovely summer day!