Oct 7, 2021 in Rouge National Urban Park (RNUP) in Markham, the Southern Ontario Section in cooperation with University of Toronto first year Master of Forest Conservation students, RNUP and the Toronto Region Conservation Authority (TRCA) participated in a CIF Memorial Tree Plant. Five hundred trees were planted by the U of T students on a beautiful planting day.

Upon student arrival, RNUP staff Julia Phillips and Paul Yannuzzi described the workings of the Park. Since it is Canada’s first Urban National Park there are many different challenges. Much of the land in the north part of the Park is agriculture. Farmers are being transitioned to long term leases on lands administered by Parks Canada and Park staff work with willing lessees to convert marginal (mostly wet) land to a natural state through stream rehabilitation and tree and shrub planting. The work is carried out in partnership with the TRCA as described by Ryan Stephenson, Project Manager for Ecosystem Management at TRCA. He explained how TRCA staff determine ecosystem needs and work required to put the land back in a natural state including tree species based on site characteristics. About 14 different tree species – all potted stock – were planted appropriately to site conditions. For example, sugar maple, red oak, and basswood on higher land and white cedar, tamarack and sycamore on the lower slopes and wetter areas. 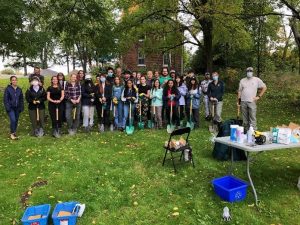 The student group with Profs, Jay Malcolm and Sally Krigston (SOS Council) in the back. 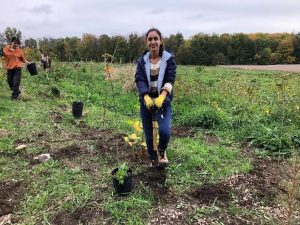 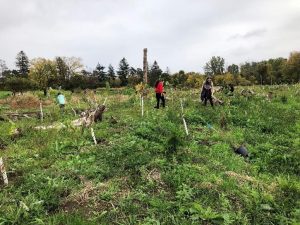 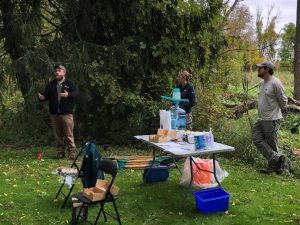